Learning from the past, improving the future

The most significant pandemics of the 20th Century took place in 1918, 1957, and 1968 and were caused by influenza viruses. In contrast, the 21st Century has been marked by alerts concerning atypical pneumonia’s caused by corona viruses. Starting from 2003, a global alert was issued for, a yet unknown, illness that became known as severe acute respiratory syndrome (SARS) caused by a novel coronavirus, that resulted in approximately 800 casualties with a mortality rate of 10%. In 2012, a similar disease named Middle East respiratory syndrome (MERS) coronavirus occurred in Saudi Arabia with a mortality rate of 35%. On March 11, 2020, the World Health Organization (WHO) declared the ongoing spread of the Severe Acute Respiratory Syndrome Coronavirus 2 (SARS-CoV-2) a global pandemic, which has a death toll of more than 850,500 (1 September 2020) causing at least 55 countries to order a lockdown during March 2020 and an unprecedented economic impact, which is yet to be assessed.

In any infectious disease, understanding the modes of transmission is a key factor in protecting healthcare workers and implementing effective public health measures. The lack of understanding the SARS-CoV-2 transmission dynamics was a major factor that led to the current isolation precautions imposed by public health authorities around the world. What makes SARS-CoV-2 stand out is its unique feature to spread, even from asymptomatic patients, via aerosol in addition to direct contact and cough droplets. 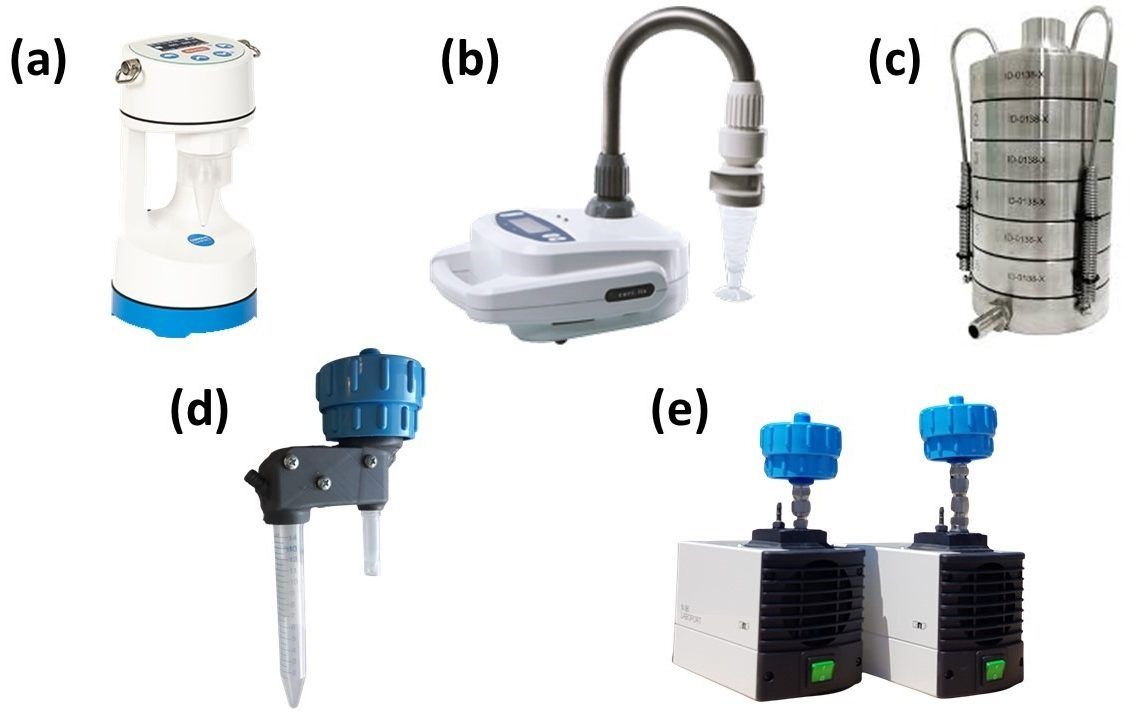 Helping clinicians on their fight against SARS-CoV-2

On the frontline of the epidemic, are healthcare professionals who have been tasked to treat those infected. During the SARS epidemic of 2003, airborne transmission may have been responsible for the largest superspreading event recorded. Numerous nosocomial superspreading events of SARS-CoV-1 were linked to aerosol-generating medical procedures. Nosocomial transmission of SARS-CoV-2 has also been reported  but the causes of transmission remained unclear. Being a clinician involves the risk of being also infected by the patients they are supposed to treat and because the virus is still new and poorly characterized, this threat is greater. Based on previous experience, healthcare workers in the intensive care unit of the Nicosia General Hospital have been raising concerns about aerosol generating procedures in the course of patient treatment that could have them exposed to a greater risk of nosocomial transmission. 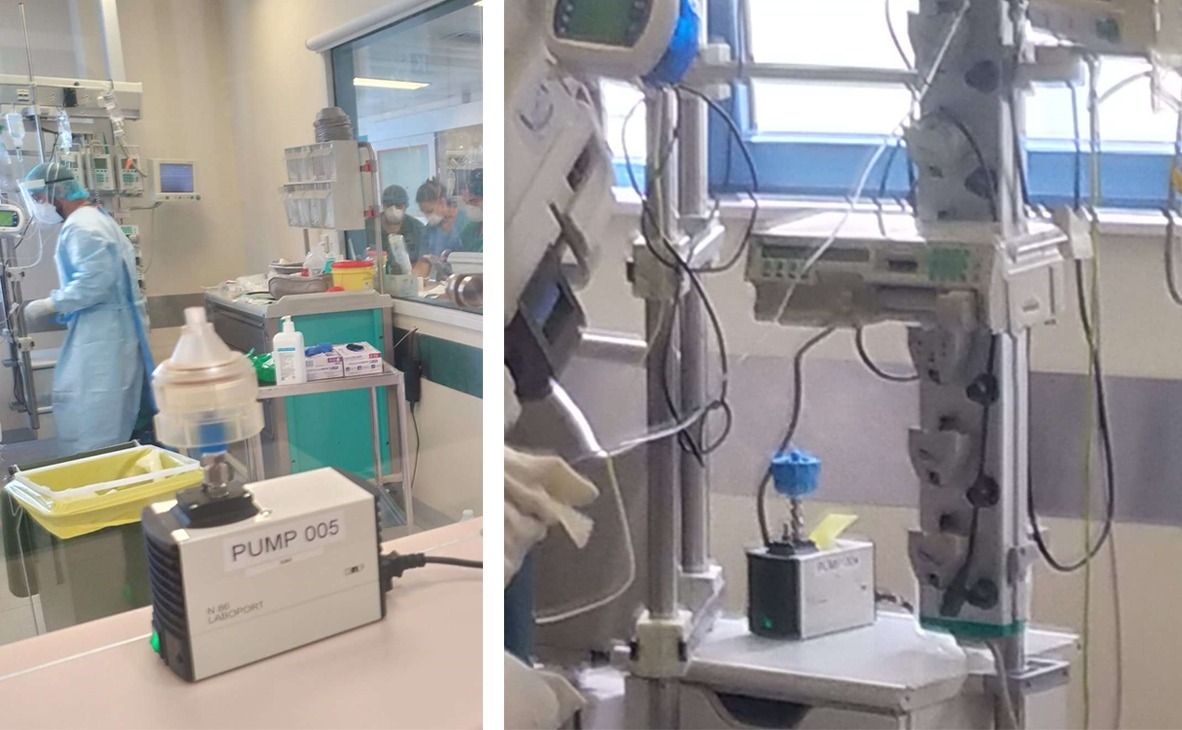 Funded by the Cyprus Research and Innovation Foundation (RIF), the Intensive Care Unit REsearch to Unravel SARS-CoV-2 dispersion ability (CURE-SARS) project will provide technical solutions to identify the presence of SARS-CoV-2 improving our knowledge on the potential spread of the virus inside hospitals and intensive care units (ICU) in specific. Our solutions are applicable to any space, public or private, where infected individuals are present. Taking advantage of the low cost proposed scheme, this project will inform health professionals working in ICU or hospital clinics whether their operating protocol puts them in danger thus protecting them from unnecessary exposure. 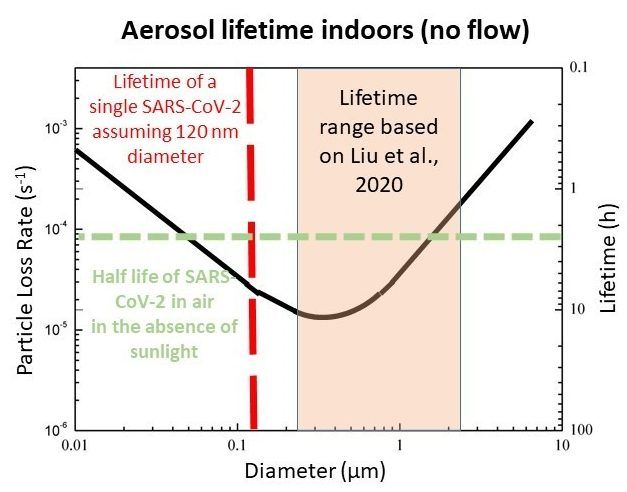 Figure 3: Lifetime of airborne particles in a 12m2 (3m high) room without ventilation (black line). The expected lifetime range is shown (pink background) along with the half-life of SARS-CoV-2 in air (green line) and the estimated lifetime of a 120 nm in diameter particle (red line).

Size is the key

In aerosol form, SARS-CoV-2 has a half-life of approximately 2.7 hours, and can travel longer distances.than cough droplets. The distance has yet to be quantified, as the size of the inducing particles remains unknown. This project also aims at adding new knowledge concerning the virus, by identifying the size distribution of the virus while airborne, an important information to be considered by public health organizations and epidemiologists when proposing measured against SARS-CoV-2.

Sampling has been conducted inside the ICU of Nicosia general hospital where intubated positive patients are residing as well as in two clinics (Nicosia and Ammohostos hospitals) where non-intubated patients are located. Additionally all clinics have been equipped with passive samplers and once per week common surfaces are sampled using swabs.

To this day only one positive sample has been identified, which belonged a fresh admission minutes after placed inside the patient room. However, all other samples have so far resulted negative. These results indicate that the protocols used in hospital clinics in Cyprus are adequate to protect clinicians from infection. Further investigation is required due to the insufficient statistics to come into definitive conclusions.